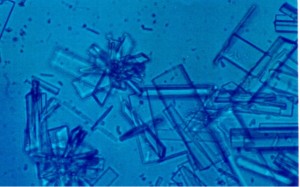 Among Richard’s flight manifest were small tubes of frozen protein protein molecules and precipitant. While in orbit, he allowed the tubes to thaw causing a reaction to take place that formed small crystal structures. The weightless environment of space helps the formation of superior crystals, which in turn enables researchers to learn more about the molecular details of these proteins – an essential component for developing new medicines and combating common human diseases. Richard returned these to the Earth where the molecular structure of the proteins were analyzed. 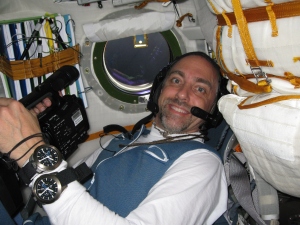 Seiko developed the Seiko Spring Drive Spacewalk watch, specifically for use in the harsh conditions of space during a spacewalk which Richard took to the International Space Station to test it in the weightless environment.

Richard’s father, Owen Garriott, made two spaceflights: aboard Skylab in 1973 and aboard STS-9/Spacelab-1 in 1983 spending a total of 70 days in space. He carried SEIKO watches on each flight and wore one continuously during his Spacelab mission.

As part of an educational initiative sponsored by DHL, students were asked to predict the result what would happen in space if two objects of different masses on a looped course were propelled with the same force. Richard brought this physics experiment to the ISS and documented the results.

Man on a Mission

Richard partnered with Austin-based production company Beef & Pie, to produce a commercial documentary about his spaceflight, the first of its kind, documenting every step of his spaceflight. Beginning with intense physical demands of astronaut training in Star City, Russia through the psychological worries as smoke filled the capsule during reentry, Richard shares an intimate account of what it was like to travel into space. Available on DVD and Amazon Video.

Broadcasts from the ISS