In 2008, Richard embarked on an expedition that he had been preparing for his entire life: spaceflight. On October 12, 2008 he launched aboard Russian Soyuz rocket TMA-13 and became the first second-generation American astronaut. During his 2 week mission aboard the ISS, Richard conducted numerous experiments on behalf of NASA, ESA, and The Nature Conservancy; created original works of art in space and hosted the first art exhibition in space; and produced educational videos aboard the ISS with the help of students across the US and the UK on what it was like to live in space.

In 1998, Richard boarded a Mir submarine and participated in the first completely private expedition to the wreck of the Titanic discovered in 1985 by oceanographer Robert Ballard and his team who, for several years, were the only people to explore this remarkable site. In his book “Explore/Create,” Richard recounts the gripping tale of being 12,600 feet beneath the surface of the North Atlantic, the dangers of this expedition, and how “maybe like so many of those people who built and perished on the Titanic,” he too had been “lulled into a sense of security” by his confidence in human technology.

Richard participated in two Antarctica expeditions (1998 and 2000), and during both he hunted meteorites along the way. On the first of these expeditions, the crew stayed close to base camp situated at the foot of Mount Vinson, but on the second expedition they trekked all the way to the South Pole and found a flurry of meteorites. Each time, poor weather forced the expeditions to drag on well beyond the initial extraction dates, to the point that – the second time around – the crew was left with nothing more to eat than chocolate bars recycled tea bags. In his book “Explore/Create,” Richard shares the excitement of meteorite hunting, the worries of a dwindling supplies, and the beauty of what he calls “by far the most beautiful and amazing thing I have seen on the surface of the Earth.” 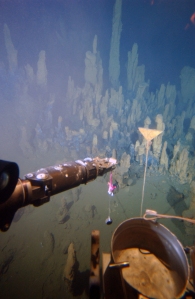 Richard was part of two submersible expeditions to the hydrothermal vents at the bottom of the ocean, in search of extremophile lifeforms. Tests conducted on extremophiles Richard brought back on his second trip unveiled that they could survive at a higher temperature than any other surviving extremophiles found at the time – these creatures could survive at 130° Celsius. And, for the explorers and thrill seekers out there, the Geocache that Richard set-up bythe thermal vents at the deepest spot in the ocean has yet to welcome its first visitor!

In March 1994, Richard led an expedition to visit mountain gorillas at the Karisoke Research Center in Rwanda’s Virungas Mountains, which had also once been the Rwandan Patriotic Front (RPF) base. While the expedition was a success, the assassination of President Habyarimana in early April 1994 ended the uneasy peace after the Rwanda Civil War and became the catalyst for the Rwandan Genocide against the entire Tutsi population along with certain moderate Hutu. This human tragedy would last three months, culminating in a death toll of approximately 800,000 people. 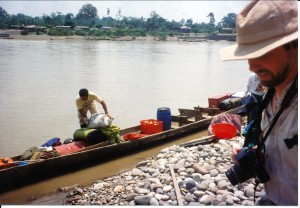 In the early 1990’s Richard began an expedition down the Amazon, beginning at the river’s headwaters in Ecuador – one of his first expeditions that also quickly became his first education in disaster planning. A drought had left water levels low and exposed decades of large trees and other debris that had been previously submerged. Richard and his team’s progress ground to a halt as they were forced to portage their dugout canoe across difficult terrain, sometimes barely advancing 10 feet. They soon became trapped and as tensions began to mount among the team, Richard quickly learned the importance of maintaining a cool head and selecting his fellow expedition members carefully.