“Welcome, foolish mortal, into the world of Akalabeth!”

Richard “Lord British” Garriott de Cayeux began his quests in the virtual world armed with only paper tape strips and a teletype when in 1975, he first gained access to a teletype connected to an offsite computer via an acoustic modem. His earliest games were Dungeons and Dragons style adventures coded in BASIC and read by a teletype. The output of these early games was a spool of paper, where the visuals of the game would be printed out after each choice a player made requiring 10’s of seconds to see asterisks for walls, spaces for corridors, dollar signs for treasure and capital letters for the locations of monsters. 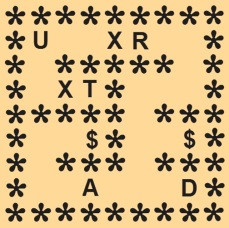 By 1979, Richard bought his first Apple ][ computers and immediately set to rewrite his 28th “D&D” style game to take advantage of the new graphical capabilities of this machine. Encouraged by the manager of the ComputerLand store where he worked, Richard set out to publish his game Akalabeth and spent the entirety of his $200 life savings on Ziploc bags and xerox coversheets. Luckily, he had an artist for a mother who could help with the cover art.

Within weeks of selling a few dozen copies of Akalabeth out of ComputerLand, the California Pacific Computer Company invited an 18 year old Richard Garriott out to California for a meeting. By 1980, over 30,000 foolish mortals were seeking their grand adventure in the world of Akalabethand Lord British was born.

Naturally, Richard immediately began building a new virtual world complete with towns and dungeons, characters with their own stories, and a lot more monsters. This world was called Ultima I: The First Age of Darkness.